Prevents mold with the same antibacterial ingredient as wasabi WASAACE

Antibacterial and anti-mold effects last for up to 180 days!
Just put it in the container and it will be firmly mold-resistant.

The same antibacterial component as wasabi acts directly on mold. 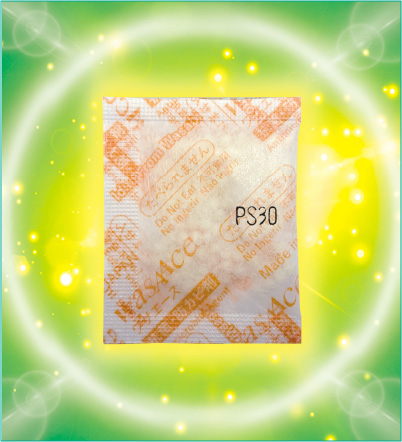 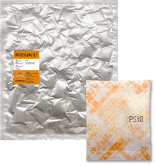 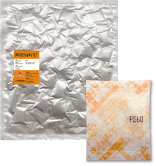 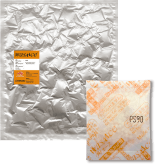 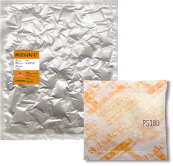 WASAACE®, which is effective for up to 180 days, is simply put in at the time of packaging at overseas and domestic factories, and its antibacterial and anti-mold effects will last from the factory to transportation by truck or ship, and to storage in warehouses. 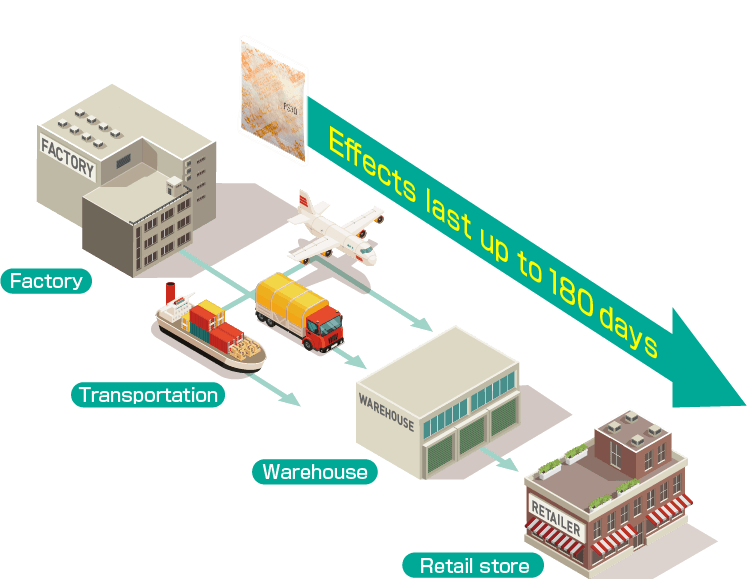 Just throw it in when you
open the bag!

Take WASAACE®out from aluminum packaging, throw it into the top of the product's packaging container, and close the lid immediately. 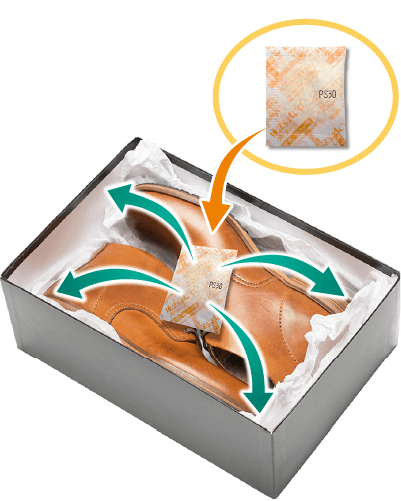 The same antibacterial ingredients as wasabi act directly on mold and bacteria to suppress their growth. 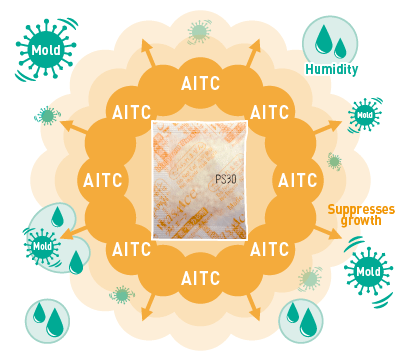 The active ingredients spread in gaseous form to cover the entire storage space. 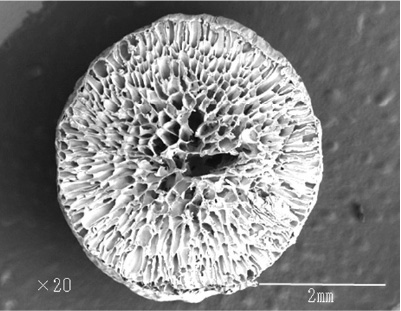 The agar medium coated with Aspergillus niger on the surface and WASAACE® were placed in a closed container and stored at room temperature for 7 days to check the growth situation of the mold.
(Test laboratory: Japan Food Research Laboratories) 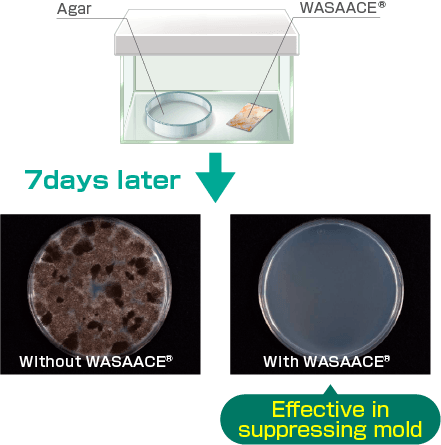 WASAACE® or silica gel was placed in a closed container containing an agar medium coated with Aspergillus niger on the surface, and stored at 27℃ for 3 days to check the growth situation of the mold. 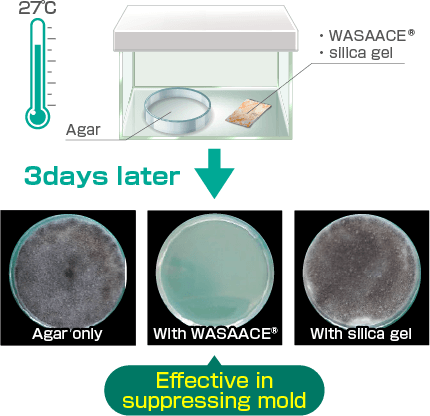 WASAACE® was opened and placed in a container at 30℃, and the decrease in the active ingredient was observed from the start of use to the end of the predetermined duration. 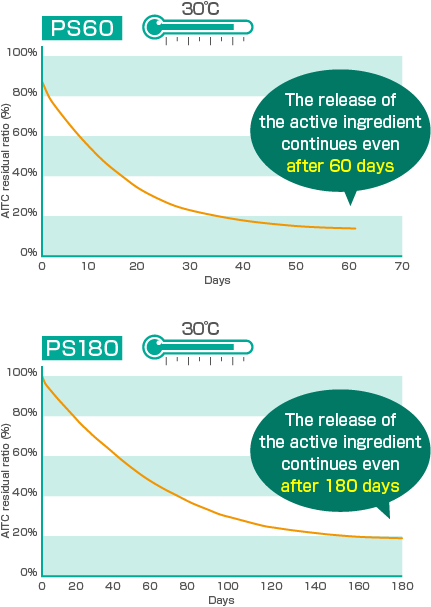 WASAACE® was left in a dryer at 30 ℃ for a period of time after opening the package. The agar medium coated with mold spores and WASAACE® left for a certain period of time were placed in an airtight container and stored at 30℃ for three days to check the growth of the mold. 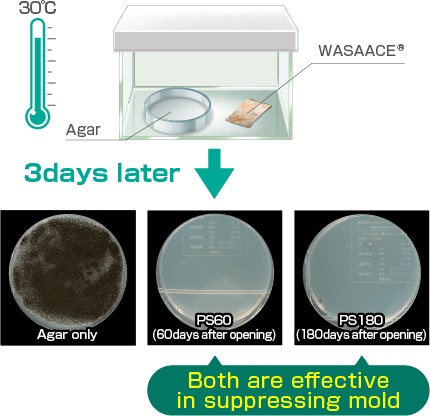 What is WASAACE®?
WASAACE is an antibacterial and anti-mold agent that utilizes the pungent ingredient of wasabi.
In what situations is WASAACE®used?
Use it as an anti-mold measure during transportation and storage. WASAACE, which is effective for up to 180 days, can be used for transportation from factories to trucks, ships, warehouses, and other storage areas by simply putting WASAACE into packing containers at overseas and domestic factories.
How is WASAACE® used?
Please use 1 packet of WASAACE per 15L container. We recommend placing WASAACE on the top side of the product, as the anti-mold component is slightly heavier than air and tends to fall from the top down.
How long does the effect of WASAACE® last after opening?
The duration of effect (validity period) of WASAACE is determined by the product number. The effective period of each product number after opening the package is as follows.
What is the expiration date of WASAACE®(when unopened)?
The expiration date is 18 months from manufacture in unopened conditions.
Why does WASAACE® have anti-mold and antibacterial properties?
Allyl isothiocyanate (AITC), the active ingredient in WASAACE, acts directly on mold and bacteria to inhibit their growth.
The active ingredient is released in a constant and sustained amount and spreads in a gaseous form, thus inhibiting the growth of bacteria and mold throughout the entire product storage space.
What is the difference between WASAACE® and sticker-type anti-mold agents?
Typical sticker-type products may have a shorter duration of anti-mold effect due to the low content of active ingredients.
WASAACE has a high content of active ingredients because the active ingredients are loaded onto porous cellulose beads, and the volatilization of the ingredients is suppressed by processing, so the effect lasts for a long time.
What is the difference between WASAACE® and desiccants such as silica gel?
Desiccants such as silica gel prevent mold growth by absorbing moisture, which is one of the factors that cause mold growth, but if there is too much moisture, the adsorption becomes limited and ineffective. If the packaging material does not have sufficient moisture barrier properties, moisture can also enter from the outside, making it difficult to determine the effective period.
Does WASAACE® eliminate mold on products?
WASAACE continues to release its ingredients within its effective period, thus maintaining its anti-mold effect. Allyl isothiocyanate (AITC) acts at a very low concentration, so simple sealing, such as in a shoe box, is sufficient to achieve the anti-mold effect.
Does the smell of WASAAACE® transfer to the product?
The smell of the active ingredient (wasabi odor) of WASAACE may be slightly transferred. Since it is a fragrance ingredient, it will volatilize over time and the odor will disappear. However, if this is a concern, taking the product out of the box and placing it in a well-ventilated area will speed up the volatilization of the odor.
Does sealing the product in a polyethylene bag increase the durability of WASAACE®?
Since the active ingredient of WASAACE, allyl isothiocyanate (AITC), has little barrier function, polyethylene bags, even if sealed, are not expected to maintain its effectiveness.
Is there any possibility of discoloration of leather goods or clothing fabrics by WASAACE®?
There have been no reports to date of products discoloring when using WASAACE. When used in the normal manner, we consider the possibility of discoloration of the product to be low.
However, if the product is to be used in contact with the product for an extended period of time, we recommend that the product be checked with the product beforehand just to be sure.
Is WASAACE® safe?
The active ingredient is allyl isothiocyanate (AITC), a pungent component of wasabi and mustard. Allyl isothiocyanate (AITC) is also used as a food additive. (Japanse Standards of Food Additives, 9th Edition, by Ministry of Health, Labor and Welfare)
How should we store WASAACE®?
Store at room temperature and away from direct sunlight without removing from aluminum packaging.
Are there any precautions for its use?
The active ingredient in WASAACE has a strong pungent odor and may irritate the eyes and nose. Since the active ingredient is highly concentrated in the aluminum bag containing WASAACE, please keep the aluminum bag away from your face when opening it. Also, do not put your face close to the bag to smell it.
If I accidentally put it in my mouth, is it a problem?
It is not edible. If accidentally swallowed, bring the product and package to a doctor. Please consult your physician.